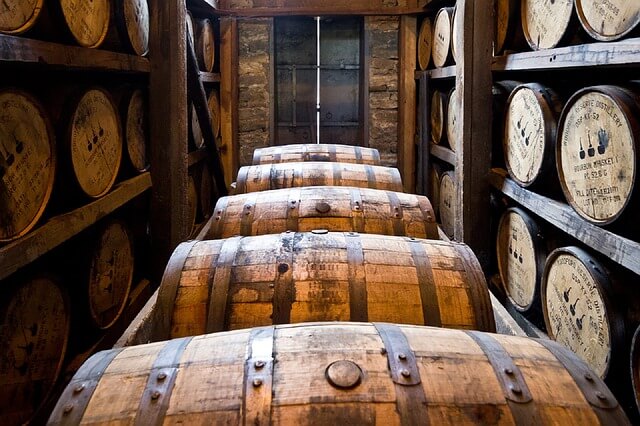 Whiskey lovers around the world will tell you that the longer a whiskey is aged the better it’ll taste. All of those distinctive flavors that whiskey connoisseurs adore in their tipple—tobacco, leather, vanilla, cedar, smoke, peat, caramel—are imparted to the “white dog,” or raw whiskey, by the barrel used to store the spirit. Whiskey in its purest form is pretty much moonshine. Before the barrel can work its magic on the freshly distilled concoction, it’s a perfectly clear liquid that packs quite a wallop. This pre-barreled mixture retains the original flavor of the mash bill, which usually includes some combination of corn, rye, barley, or wheat.

Bourbon, America’s favorite whiskey, has a few strict requirements set forth by the U.S. Congress in the 1964 Federal Standards of Identity for Distilled Spirits, including:

But what the heck is a new, charred oak barrel?

Charring barrels has a long and somewhat mysterious origin. Though no one is entirely certain, most professionals believe that distillers burned their barrels to remove leftover impurities from previously stored goods and that this tradition was passed down from generation to generation until it became industry standard.

Basically, charring is exactly what it sounds like. Scorching flames are applied to the inside of the barrel for a specific period of time in order to reach one of 5 charring levels.

Here’s how it breaks down:

Charring the barrel for these lengths opens up the wood and allows the “white dog” whiskey to soak in the flavors more easily before the barrels are put into storage. There’re also a number of scientific terms that apply to the charring method. Some of these are hemicellulose, lignin, and oak lactones.

Check out this video of a whiskey barrel being charred:

What Happens in the Barrel?

Whiskey aging requires two crucial elements: time and patience. The oak barrels are generally kept in storage for anywhere between 2 to 20 years, though most professionals seem to think that 8 to 12 years is the sweet spot. While the raw whiskey is waiting to become that beautiful brown liquid that 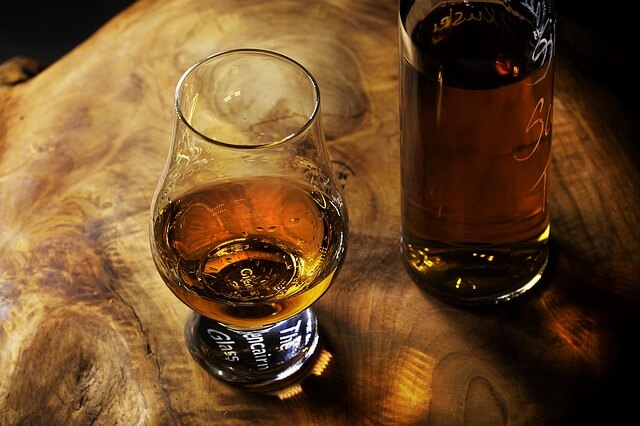 millions of Americans enjoy every year, the oak barrel contracts in colder weather and expands in hotter weather, causing the whiskey to either pull flavors from the wood or evaporate into the barrel, building the whiskey and the wood’s flavor profile.

This symbiotic relationship occurs in the distiller’s warehouse and is either guided by the decades of experience that the distiller has in concocting their spirits or is overseen by meticulous observation and taste-testing throughout the process.

One more important and poetic-sounding term you should remember, regarding the barrel-aging process, is “angel’s share.” The “angel’s share” refers to the amount of whiskey that is evaporated in the storage area, which ups the proof by extracting water from the mixture. Most American whiskeys end up somewhere in the 80 to 100 proof range, while anything over 120 proof is considered to be a fairly high-octane whiskey.

Willie Nelson, the cowboy-poet, who sang the classic country tune “Whiskey River” once sang, “I been a long time leaving, but I’m going to be a long time gone.” This is probably a good lyric to remember when selecting and sipping your next whiskey. It might take a while for your favorite whiskey to age, but that just means you should enjoy it with as much patience once it’s in your glass.